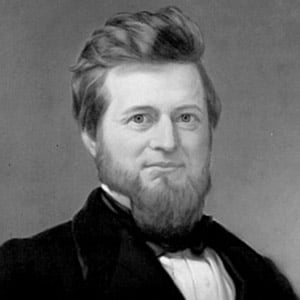 After serving during the early 1860s as Wisconsin's Secretary of State, this Whig-turned-Republican Party politician became the seventh Governor of Wisconsin. After only three months in office, he drowned in the Tennessee River while trying to board a traveling steamboat from a stationary, smaller boat.

After working for a time as a teacher, he began editing a Whig publication called the Southport American. As a member of the newly-formed Republican Party, he served in the Wisconsin State Senate in the mid 1850s.

He was succeeded in the office of Governor of Wisconsin by his Lieutenant Governor, Edward Salomon.

A native of East Haddam, Connecticut, he relocated to Ohio at the age of eight. He later settled in Wisconsin with his wife, Cordelia Perrine.

He and William Barstow were both mid-nineteenth-century governors of Wisconsin.

Louis Harvey Is A Member Of