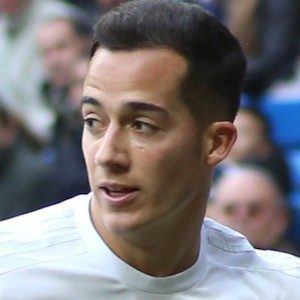 Right winger who joined Real Madrid in 2015 after previously playing with Real Madrid C, Real Madrid B, and 33 matches on loan to Espanyol. He has also played for the Spanish national team.

His youth system career brought him from Curtis to Ural to Real Madrid in 2007 where he remained until 2010 when he made his senior debut.

He was born in Curtis, Galicia, Spain to parents Carmen Iglesias and Tino Vasquez.

He replaced Karim Benzema in the match that he would score his first competitive goal.

Lucas Vázquez Is A Member Of