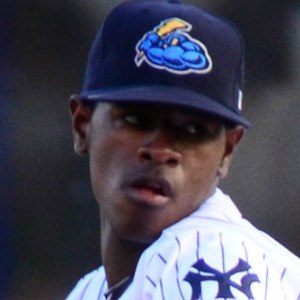 MLB starting pitcher who signed with the New York Yankees as an international free agent in 2012. He was soon deemed to be one of the team's top prospects and made his major league debut in 2015.

After signing with the Yankees in 2012, he spent time in the Dominican Summer League, working his way up to AAA baseball in two years.

He had a strong first season with the Yankees, recording an ERA under 3.00, but started the 2016 0-6 before getting injured and being sent back to the minors.

He had a daughter named Abigail in July of 2015.

Luis Severino Is A Member Of