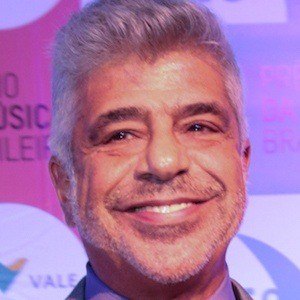 Singer and guitarist known for his successful solo career in various genres. His debut album, Tempos Modernos, sold over 150,000 copies worldwide, earning it a Gold certification.

He began playing music when he was 12 years old. He was heavily influenced by the Beatles growing up, and formed a band similar in style called Cave Man. He embarked on his career in music, via joining several different bands, before finishing high school.

He was born and raised in Rio de Janeiro, Brazil. His father was a military man.

He has collaborated with award-winning singer and songwriter Gilberto Gil.

Lulu Santos Is A Member Of