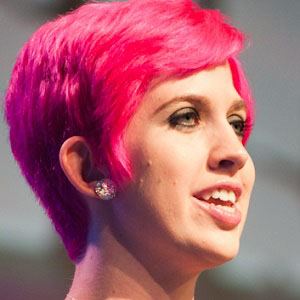 As Mojang's brand director, she is the face of the company and attends all Minecraft-related events. Her popularity began as a web video star, posting Minecraft Let's Play videos on her YouTube Channel, MinecraftChick.

She wore a pink wig and heavy makeup during her Minecrafts videos. To this day her Minecraft avatar has bright pink hair.

She moved to Stockholm, Sweden, to serve as Mojang's Director of Fun, which was then renamed Brand Director.

Her MinecraftChick video "Contest Winner Announcement" introduces her cat, Elizabeth, and mentions her parents. She has a sister who is a nurse at a children's hospital.

Lydia Winters Is A Member Of