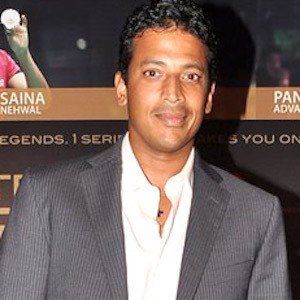 He debuted in 1993 as a professional tennis player. He subsequently played for the University of Mississippi's tennis team in 1994-1995 as a mixed doubles competitor. He is an alumni of the school.

On March 26, 2001, he received India's highest national honor, the Padma Shri. He received it alongside his frequent partner, and fellow prolific Indian tennis player, Leander Paes.

In February 2011, he married his wife and former Miss Universe Laura Dutta. In January 2012, she gave birth to the couple's first daughter, Saira.

He has been called one of the greatest tennis players of all-time by fellow world-renowned competitor Roger Federer.

Mahesh Bhupathi Is A Member Of