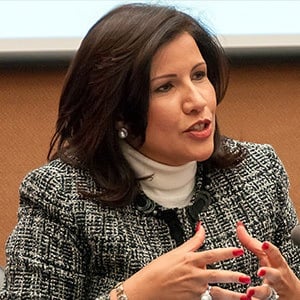 Politician and activist best known for being the Vice President of the Dominican Republic. She is also known for having been the former first lady from 2004 until 2012.

She earned her Doctorate in Law from the Autonomous University of Santo Domingo and her Masters in Economic Legislation. She was named Goodwill Ambassador for the Food and Agriculture Organization of the United Nations in 2009.

She is known for having been only the second woman to serve as Vice-President of the Dominican Republic.

She married fellow politician and former President Leonel Fernandez in 2003.

She served as Vice President under Dominican Republic President Danilo Medina in 2012.

margarita cedeno de fernandez Is A Member Of