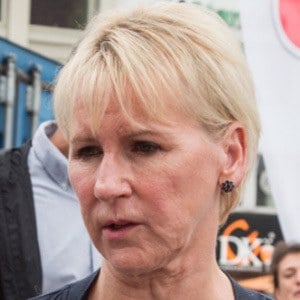 After high school, she opted for a professional career and started working as a banking clerk at the Alfa Savings bank in Karlstad. She then worked as an accountant before becoming the CEO of a regional television network based in Varmland. She ventured into politics in 1999 when she served as Environment Commissioner in the Swedish Government.

She has earned several honors and distinctions throughout her political career including an Honorary Doctorate at Chalmers University in 2001, the Grand Star of the Order of Jerusalem from the State of Palestine in 2016 and the monismanien Prize for Freedom of Speech in 2009.

She was born and raised in Skelleftea, Sweden and married Hakan Wallstrom in 1984. Together they have two children.

She travelled to Saudi Arabia where she met and spoke with King Salman about the relationship between Sweden and Saudi Arabia.

Margot Wallstrom Is A Member Of