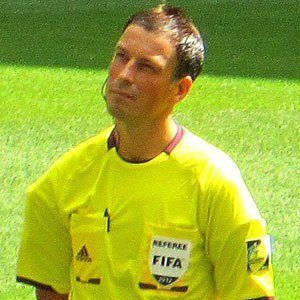 Top-ranked soccer referee who has officiated for the English Premier League since 2004 and FIFA since 2006.

He made his professional officiating debut in the Northern League in 1993.

He refereed the Olympic Men's final and Football Leauge Cup final in 2012.

He and his ex-wife Helen had one son.

He refereed for Jesus Corona and Mexico's national team during the 2012 Olympic Men's tournament final.

Mark Clattenburg Is A Member Of