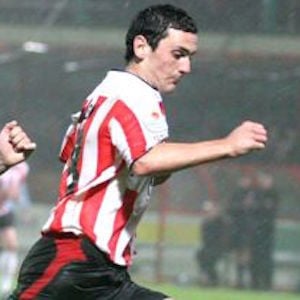 Former Irish soccer forward known primarily for his time with Derry City. He scored 114 goals in 209 games with the club, breaking Liam Coyle's club record of 112.

He played for Tranmere Rovers and Huddersfield Town during his youth career, then bounced between Finn Harps and Monaghan United before establishing himself with Derry City in 2003.

During his career, he won five League of Ireland Cups. He led the league in scoring with 16 goals in 2008.

He was first diagnosed with a brain tumor in 2008, but fought through the disease and subsequent treatments to play another six years of professional soccer. He passed away from cancer on February 2, 2016.

He and Paddy McCourt were teammates on Derry City.

Mark Farren Is A Member Of