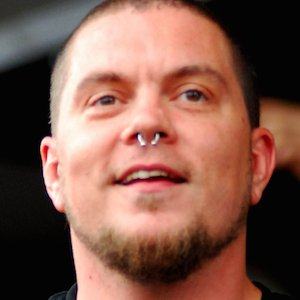 Former rock singer for the heavy metal band Chimaira, he is a blogger, photographer, and musician based in Ohio. He writes columns for Revolver Magazine and GunShyAssassin, usually focused on the topics of meditation, travel, and nutrition.

He studied culinary arts at the Polaris Culinary Academy and was always an avid reader. He always continues his education by discovering new and interesting online courses.

He has been featured in Fight! Magazine in the July 2008 edition and MMA Weekly in the April 2009 edition because of his mastery of Muay Thai.

He has lived in Brunswick, Ohio, with his pet dog. He has been dating his girlfriend, who is a make up artist and fitness enthusiast despite having Crohn's Disease, in 2008.

He played in Chimaira with bassist Matt Devries. Together they have sold over a million albums internationally and opened several of their records on Billboard's Top 200 Albums list.

Mark Hunter Is A Member Of