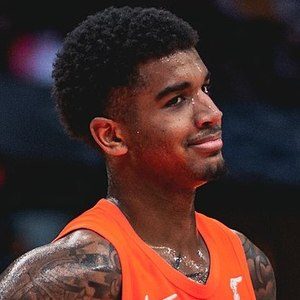 Power forward who was taken 8th overall by the Sacramento Kings in the 2016 NBA Draft. He was then traded on draft night to the Phoenix Suns. In his rookie season with the Suns, he was named to the NBA All-Rookie Second Team.

He played baseball and football during his childhood. After suffering a broken collarbone in 8th grade, his mom disallowed him from playing football in the future.

He was an honorable mention Pac-12 All-Freshmen selection in his lone season at the University of Washington, where he averaged 13.7 points, 5.4 rebounds and 1.6 blocks per game.

He is the 4th oldest of 9 total siblings. His mom Shawntae Wright became a licensed clinical social worker.

When he was on the floor with Devin Booker and Dragan Bender, the Suns became the first NBA team to have 3 teenagers playing alongside each other in the same game.

Marquese Chriss Is A Member Of