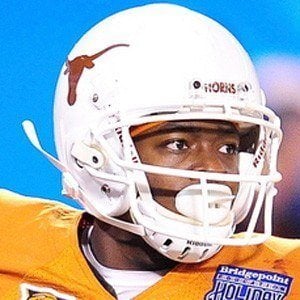 Speedy kick returner and wide receiver who was a third round pick of the Buffalo Bills in 2013 after a standout track and football career at the University of Texas.

He caught 132 passes for 1,709 yards and 17 touchdowns during his career at Rowlett High School.

At the University of Texas, he won two NCAA championships in the long jump (2010, 2012) and was a four-time All-American track and field athlete. On the football field, he was named the Alamo Bowl Offensive MVP in 2012. He also represented the U.S. in the long jump event at the 2012 Olympics.

He was born and raised in Lubbock, Texas. He scored an emotional touchdown hours after his wife gave birth to their stillborn son Marquise Jr.

His Longhorns lost 37-21 to the University of Alabama in the 2010 BCS National Championship Game where running back Mark Ingram was named Offensive MVP.

Marquise Goodwin Is A Member Of