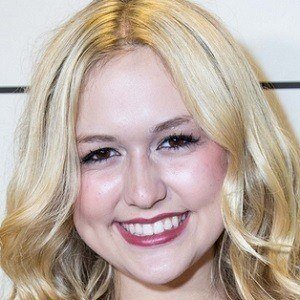 Singer-songwriter and actress who released an EP called Your Songs Vol. 1 and is also popular on YouTube for her covers. She was previously in a band which won the OC People's Choice for the best youth band called Fusion Beat.

She joined a music group when she was just 3 years old. She earned her first big opportunity when she sang "Love Letters in the Sand" alongside Pat Boone and his grandson Ryan when she was 4.

She was an extra in the film Yours, Mine, and Ours and has been an extra in numerous other films. On stage, she booked the eponymous role in a production of Annie when she was 7. Other stage roles of hers include performances in Evita and Brigadoon, Irving Berlin's White Christmas and The National Broadway Tour of Chitty Chitty Bang Bang.

She is from Southern California. She has a younger brother.

She sang "God Bless America" on Larry King Live when she was five years old.

Mary Desmond Is A Member Of