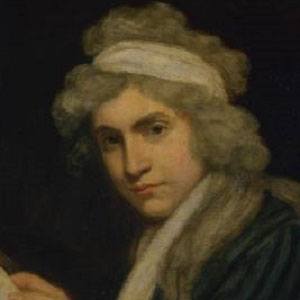 Famous for her 1792 treatise A Vindication of the Rights of Woman, this writer and early feminist philosopher is also notable for her posthumously-published work Maria: or, The Wrongs of Woman, as well as for a travel-themed publication titled Letters Written in Sweden, Norway, and Denmark.

She had a brief romantic affair with the Swiss artist and writer Henry Fuseli.

In early 1797, on the heels of a tumultuous relationship with American writer and businessman Gilbert Imlay that resulted in an illegitimate daughter, Wollstonecraft married fellow writer and political philosopher William Godwin. She died shortly after giving birth to her second child, future Frankenstein novelist Mary Shelley (born Mary Wollstonecraft Godwin).

Her nonfiction works on the topic of children's education were influenced by the ideas of philosopher John Locke.

Mary Wollstonecraft Is A Member Of