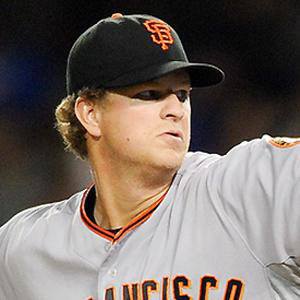 MLB pitcher who helped lead the San Francisco Giants to World Series Championships in 2010 and 2012. He was named to 3 All-Star games between 2009 and 2012 and on June 13, 2012, he threw the first perfect game in San Francisco Giants' history against the Houston Astros.

He attended Houston High School in Germantown, Tennessee and was drafted straight from high school by the Giants in 2002.

He was also a member of the Giants' 2014 World Series Championship team but an elbow injury kept him on the bench during the postseason.

He married Chelsea Cain in the fall of 2009 and the couple had their first child together, a daughter named Hartley, in December 2010.

He won the World Series with the Giants in 2010, 2012 and 2014 alongside teammate and fellow pitcher Tim Lincecum.

Matt Cain Is A Member Of