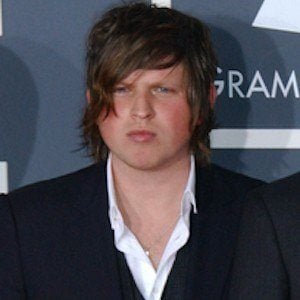 Guitarist most famous for being the lead guitarist of the Grammy-winning southern rock band Kings of Leon. As a member of the band, he has recorded multi-platinum albums like 2008's Only By the Night and 2010's Come Around Sundown.

He began playing guitar at age 10. He moved to Nashville, Tennessee in 1999 and joined Kings of Leon the same year.

His birth name is Cameron, but, like all the other members of Kings of Leon, he chooses to go by his middle name, Matthew.

He married Johanna Bennett in 2009. He has children with Bennett named Knox and Adrian.

He is the cousin of the other three founding members of Kings of Leon: Caleb, Nathan and Jared Followill.

Matthew Followill Is A Member Of