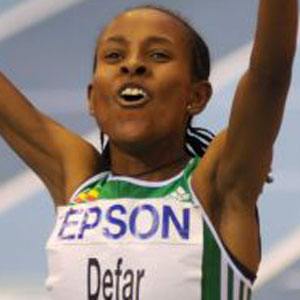 Long-distance runner whose specialty was the 3000 meters and 5000 meters events; she broke several records during her time on the track.

She was also successful in other global competitions, especially the World Championships; she broke the indoor records for the two-mile run, 3000 meters, and 5000 meters.

She and her husband adopted several children and she was a major contributor to numerous children's charities.

Her world record for 5000 meters was surpassed by her Ethiopian colleague Tirunesh Dibaba in 2008.

Meseret Defar Is A Member Of