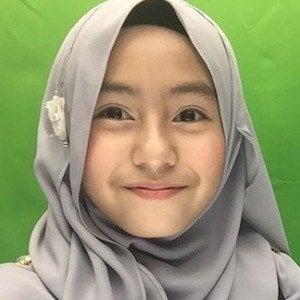 Rose to fame as a child actress, appearing in films and television beginning in 2008. Some of her prominent films including Nur Kasih the Movie, Papa I Love You, and Lagenda Budak Setan 3. Incredibly popular on social media, she has more than 600,000 Twitters followers and over 2.3 million Instagram followers.

She got her start in television commercials for companies like Bank Islam, Nokia, and Unicom.

She won Best Kid Actress at the TV3 Kids Awards and made it into the Malaysian Book of Records for the Youngest Actress Winning a Malaysian Film Festival Award.

She is the third child of four.

She starred alongside Lisa Surihani in the 2011 film Papa I Love You.

Mia Sara Nasuha Is A Member Of