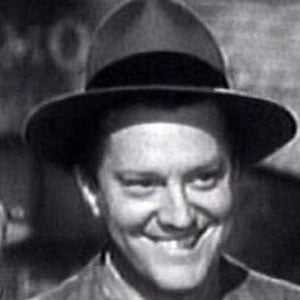 Remembered for his comedic roles in such 1940s films as Lady of Burlesque and The Eve of St. Mark, this 20th-century actor also starred in the 1950s NBC situation comedy It's a Great Life.

He began his entertainment career as a vaudeville performer and bandleader. He rose to fame after starring in a stage production of The Eve of St. Mark and subsequently being cast in the film adaptation of the same script.

His role in the 1944 film Something For The Boys allowed him to showcase his skill as a tenor vocalist.

His first marriage, to Grace Watts, resulted in two children. With his second wife, stage and screen actress Virginia Mayo, he had a third child, Mary Catherine O'Shea.

He played the boyfriend of Barbara Stanwyck's character in Lady of Burlesque.

Michael O'Shea Is A Member Of