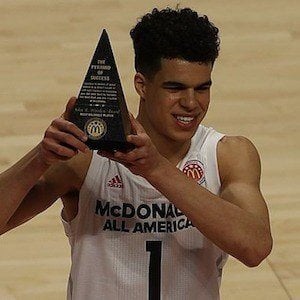 Unanimous top-5 recruit in the high school class of 2017 who originally committed to play college basketball at the University of Washington. However, he decommitted after Washington head coach Lorenzo Romar was fired, and instead agreed to play at the University of Missouri. He declared for the NBA after one year at Missouri and was selected 14th overall in the 2018 NBA Draft by the Denver Nuggets.

He's played for the United States' U-18 national team. He was homeschooled through middle school.  He was named MVP of the 2017 McDonald's All-American Game.

His father, Michael Porter, Sr., is a coach on the University of Missouri staff who previously served under Romar at Washington. His mother is Lisa Porter, and he has seven siblings, including class of 2018 prospect Jontay. He began dating actress Madison Pettis in late February 2017.

He agreed to play for Cuonzo Martin and Missouri after the university hired his father in 2017.

Michael Porter Jr. Is A Member Of