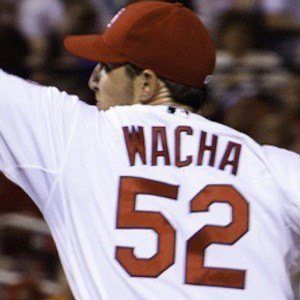 MLB pitcher who starred for the St. Louis Cardinals in the 2013 playoffs, winning NLCS MVP after shutting down the Los Angeles Dodgers.

He was selected 19th overall by the Cardinals in the 2012 MLB Draft. He made his MLB debut for the team on May 30, 2013, allowing just one run in 7 innings against the Kansas City Royals.

He was born to Tom and Karen Wacha.

He and fellow starting pitcher Adam Wainwright helped lead the Cardinals to the 2013 World Series where they lost to the Boston Red Sox in 6 games.

Michael Wacha Is A Member Of