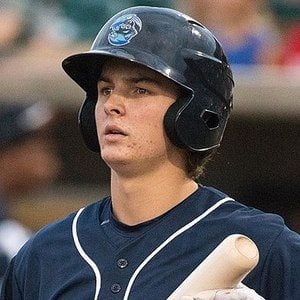 American professional baseball player known for his work as an outfielder for the Philadelphia Phillies. He is known for batting left and throwing right and has also played with the Lakewood BlueClaws and the Clearwater Threshers.

He attended La Costa Canyon High School in San Diego. His consistent playing led him to go on to play for UCLA. He was selected by the Philadelphia Phillies in the MLB draft. He signed with the team in June of 2016 and made his professional debut with the Gulf Coast Phillies.

He is known for having been selected as the first overall pick of the 2016 MLB draft.

His grandfather, Bill Moniak, played for the Boston Red Sox.

Maikel Franco is a fellow Philadelphia Phillies player who is known for his work with the Gulf Coast Phillies as well.

Mickey Moniak Is A Member Of