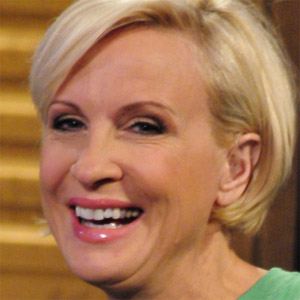 Known for co-hosting the MSNBC show Morning Joe, she has also served as an anchor for Up to the Minute, HomePage, and as a correspondent for multiple CBS News shows.

She started her journey in broadcast journalism as an assistant for ABC's World News This Morning before moving on to a Fox local Connecticut channel.

She reported live from Ground Zero on September 11th, 2001.

She married TV reporter James Patrick Hoffer in 1993 and they had two daughters together before divorcing in 2016. In 2017, she got engaged to her co-host Joe Scarborough.

She was involved in a controversy involving Russel Brand following his appearance on her MSNBC show.

Mika Brzezinski Is A Member Of