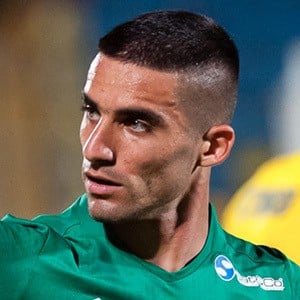 Iranian professional football player best known for his work with the Russian football club Akhmat Grozny. Known for his work as a fullback and winger, he is also recognized for playing on Iran's national team.

He first started his youth career with the Persepolis club in 2007. He then was traded to Damash Tehran in 2008 and went on to make his senior career debut in 2014 as part of the Rah Ahan club in 2014. The following year he played on the Iran under 23 national team.

He was given the nickname Mig-Mig by football fans in Iran based on the Roadrunner character from the Wile E. Coyote series.

His twin brother Mehrdad is also a professional football player known for his work with the Sepahan club in the Persian Gulf Pro League.

He was invited by coach Carlos Queiroz to attend the Iran national team camp in June of 2015.

Milad Mohammadi Is A Member Of