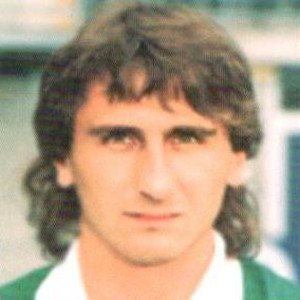 Macedonian footballer and soccer coach who played for Red Star Belgrade and other teams.

He was a top scorer for the FK Cukaricki Stankom football club in his youth.

He transferred from Red Star Belgrade to rival team, FK Partizan, in 1986, and went on to win the 1987 Yugoslav Championship with Partizan, much to the distress of Red Star fans.

He married Andrea Gjurovski, with whom he had a son, Mario, who also grew up to be a professional soccer player.

He and Turkish football contemporary, Tanju Colak, both played the position of Striker.

Milko Gjurovski Is A Member Of