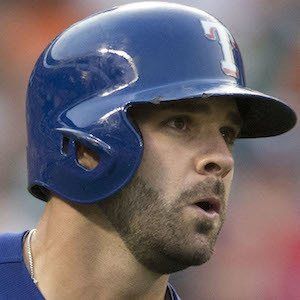 17th round selection of the Texas Rangers in the 2007 MLB Draft who made his major league debut for the team in July of 2010. He is a first baseman who has also filled in as a designated hitter and right fielder. He won a World Series title with the Boston Red Sox in 2018.

He attended Mississippi State University and played for a collegiate league team called the Danville Dans.

He began his major league career with a .1000 batting average after hitting a single in his first plate appearance against pitcher Vin Mazzaro.

He was born in Amory, Mississippi. He is a third cousin of Dallas sports talk radio personality Gordon Keith.

He was first brought up to the major after Texas placed Ian Kinsler on the disabled list.

Mitch Moreland Is A Member Of