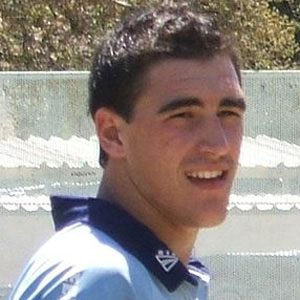 Left-arm fast bowler who set an ODI record by taking his first 100 wickets in only 52 innings. He's also represented Australia in Tests, and he set a Melbourne Cricket Ground record by hitting seven sixes at the MCG in one innings.

He played junior cricket at Berala Sports Cricket Club. He made his first-class debut with New South Wales in 2009.

He was named Man of the Tournament at the 2015 Cricket World Cup after taking a tournament-leading 22 wickets. He became the 14th Australian to take 100 Test wickets and score 1,000 Test runs.

He has a younger brother named Brandon who represented Australia at the 2016 Olympics in the high jump. He married Alyssa Healy, who's played for Australia's women's Test team, in 2016.

He and Peter Siddle have both scored 1,000 runs and taken 100 wickets for Australia in Tests.

Mitchell Starc Is A Member Of