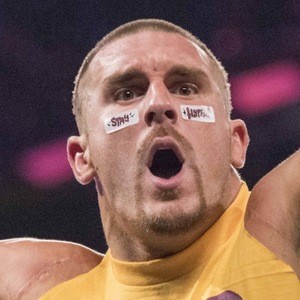 Egyptian professional wrestler who joined the developmental territory WWE NXT in 2013. He has also played professional soccer for clubs like Manchester United and football for NFL teams like the Arizona Cardinals.

He was a four-year starter on the T.C. Williams High School football team.

His unreal strength earned him the nickname "The Iron Shiek" while playing for the Arizona Cardinals.

His parents are T.J. Muhtadi and Maria Muhtadi-Roach. He also has sisters named Lena and Tammy.

He wrestled Bo Dallas in a battle royale on a May 2013 episode of "WWE NXT."

Mojo Rawley Is A Member Of