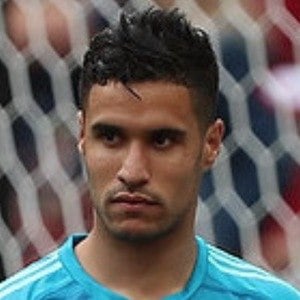 Professional football player who is known for playing with the Spanish club Malaga CF as a goalkeeper. He is also known for his work as a keeper on Morocco's national team.

He first began his youth career playing with the club Goyu Ryu and played for Ceuta in 2008. He began his senior career on the Ceuta B team and joined Melilla's first team in 2010. He then began playing for Morocco's national team in 2015.

He made his international debut with Morocco in 2015 and also played in the 2017 Africa Cup of Nations.

He was born and raised in Melilla, Spain.

As a part of the 2018 FIFA World Cup, he played alongside Nabil Dirar and Hakim Ziyech on Morocco's national team.

Munir Mohand Mohamedi Is A Member Of