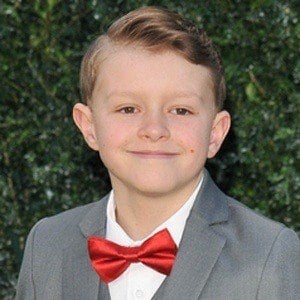 Child actor who became best known for his role as Chip Potts in the 2017 live-action version of the classic Disney tale Beauty and the Beast.

In 2014, he portrayed Tyler in the TV adaptation of Babylon.

He sang on the songs "Something There" and "The Mob Song" as heard on the Beauty and the Beast soundtrack.

Coincidentally, he shares a birthday with 3 of his Beauty and the Beast co-stars: Emma Watson, Emma Thompson and Luke Evans.

Nathan Mack Is A Member Of