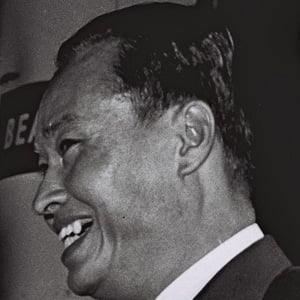 Prime Minister of Burma in the 1960s who was also the Head of State of the country from 1962 to 1981. He resigned in the aftermath of the Four Eights Uprising but many believe he orchestrated the military coup that crushed all hopes for democracy several months later.

He attended Rangoon University for two years before leaving. He went on to become a member of the Dobama Asiayone, a nationalist group.

He founded the Burma Socialist Programme Party in 1962 and in 1964 he formally declared it to be the only legal party.

He was married six times and had six biological children, in addition to three more, which were brought into the marriage by his third wife.

He and Carlos Keller were both politicians active in socialist movements in their countries.

Ne Win Is A Member Of