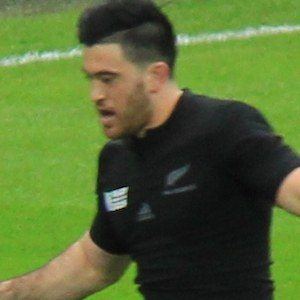 New Zealand rugby fullback known for being a member of the 2015 New Zealand All Blacks, who won that years Rugby World Cup. He's also known for playing with Manawatu and Hurricanes.

He played with the Canterbury Bulldogs and Massey University before making his way to Manawatu.

His play in 2015 earned him Breakthrough Player of the Year honors.

He was born to Richard Skudder and Heneriata Milner and is of Tongan and Maori descent. He has an uncle and cousin who were members of the All Blacks in the late 1960s and early 1970s.

He played with Sonny Bill Williams for the All Blacks in 2015.

Nehe Milner-Skudder Is A Member Of