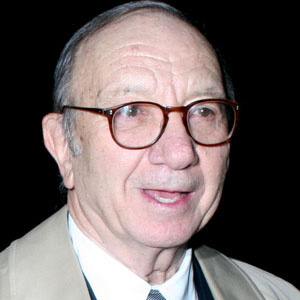 New York playwright who wrote such popular plays as Barefoot in the Park, The Odd Couple, and Biloxi Blues. Across his career, he received more combined Tony and Oscar Award nominations than any other writer.

He grew up during The Great Depression and graduated from DeWitt Clinton High School at age sixteen, where he earned the nickname Doc.

In 1991, he won a Pulitzer prize and a Tony Award for his play Lost in Yonkers.

He was married to Joan Baim, Marsha Mason, Diane Lander, and Elaine Joyce. He had three daughters, Nancy, Ellen and Bryn.

In 1950, he wrote scripts for comedian Sid Caesar's variety show Your Show of Shows.

Neil Simon Is A Member Of