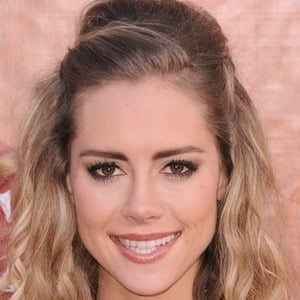 Widely known for comprising one-half of the indie pop duo High Dive Heart alongside her husband and platinum songwriter Jason Reeves. She co-released their first EP Sonic Graffiti in 2015, and was named by Billboard as one of Tomorrow's Hits. She has also been a member of the band Gone West.

She learned how to play guitar at age 17 after a pole vaulting accident kept her from athletics. She won the Got Milk songwriting contest at age 19.

She wrote the hit single for Big & Rich titled "That's Why I Pray," which debuted as the highest for a duo in the Nielsen era. Her first High Dive Heart single "Vintage" appeared on The Today Show and CNBC.

She and her husband married in 2012. They fell in love the precious year while she helped him write for his debut solo album The Lovesick.

She enjoyed success when she penned the single "The Sun Will Rise" for Kelly Clarkson and Kara DioGuardi in 2011.

Nelly Joy Is A Member Of