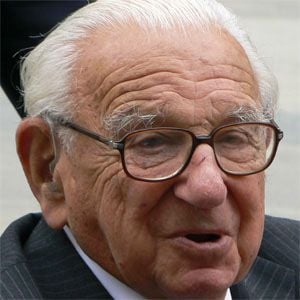 British war hero who was a humanitarian and organized a rescue mission of 669 mostly Jewish children from Czechoslovakia on the eve of World War II. He found homes for them and helped move them to Britain.

He worked at Behrens Bank and Wasserman Bank in Berlin before moving to London and becoming a stockbroker.

He was appointed a Member of the Order of the British Empire for his work establishing Abbeyfield homes for the elderly in 1983.

He was married to Grete Gjelstrup.

He was portrayed by Rupert Graves in the 1999 film All My Loved Ones.

Nicholas Winton Is A Member Of