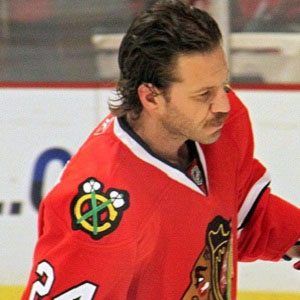 Canadian defenseman who played eleven NHL seasons, most notably with the Boston Bruins, Phoenix Coyotes and Chicago Blackhawks. He made the 2003-04 NHL All-Star Game with the Bruins and won his only Stanley Cup with the Blackhawks in 2010.

He grew up playing junior hockey with the NobleKing Knights in his hometown of Nobleton, Ontario. He was originally drafted by the Washington Capitals in the 1997 NHL Entry Draft.

He began providing color commentary for radio broadcasts of Phoenix Coyotes games during the 2014-15 season.

He married Jen Patterson in August 2012. He has children named Emmerson, Bryar and Harland.

Nick Boynton Is A Member Of