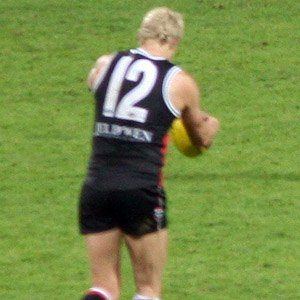 Professional Australian rules football player who debuted in 2001 as a forward for St Kilda.

He played amateur football at All Saints Anglican School, and was chosen with the first pick in the 2000 draft.

He won the Trevor Barker Award, and the Leigh Matthews Trophy, and was selected to the All-Australian team in 2004.

He married Catherine Heard in October, 2012, in Waco, Texas.

He spent more than a decade playing for a St Kilda team that is publicly supported by actor Eric Bana.

Nick Riewoldt Is A Member Of