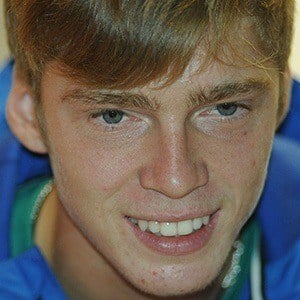 He first began his junior career ay the age of 13. After competing and winning several tournaments, he began his pro career at the age of 15. He then went on to compete in his first ATP tournament in 2015.

He is known for winning multiple awards and cups for his playing including the 2017 Croatia Open, the 2015 Kremlin Cup, and the 2014 Junior Grand Slam French Open.

He was born and raised in Moscow, Russia. His father was a professional boxer who later became a restaurant owner and his mother was professional tennis coach Marina Marenko.

He is known for having played and won against a variety of other tennis stars including Fernando Verdasco, Grigor Dimitrov, and David Goffin.

Andrey Rublev Is A Member Of