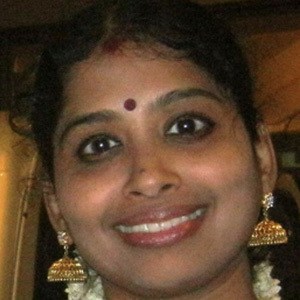 Indian musician and playback singer who is best recognized for performing in several different language films and for having released over 500 albums. She is best known for her Tamil film appearances and has starred in Panjumittai and Aayirathil Oruvan.

She started her career in 1998 when he made her debut in the Tamil language film Jeans where she performed the popular song "Kannuodu Kaanbadhalam". She started gaining further attention in 2000 when she performed songs for several of the years popular films including Sri Srimati Satyabhama and Moodu Mukkalaata.

She has won several awards for her music and performances including the Best Concert Award on multiple occasions from the Madras Music Academy as well as the Kalaimamani award which she was given by the Government of Tamil Nadu.

She was born and raised in Thiruvaiyaru, Tamil Nadu, India. Her mother was music teacher and composer Lalitha Sivakumar. She has two daughters named Tanujasree and Tejasree.

She starred alongside Rajinikanth and Jyothika in the 2005 comedy horror film Chandramukhi.

Nithyasree Mahadevan Is A Member Of