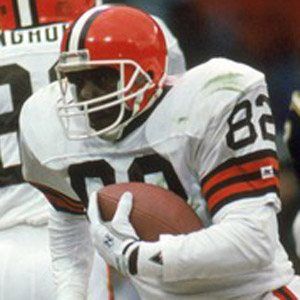 NFL general manager who won a Super Bowl with the Baltimore Ravens in 2013. He is the recipient of the Ed Block Courage Award as well as the Byron "Whizzer" White NFL Man of the Year Award. He also played tight end for the Cleveland Browns from 1978 to 1990, earning three Pro Bowl selections.

He was a legendary player at the University of Alabama, having been named the Alabama Player of the Decade for the 70's.

His father was also named Ozzie Newsom. He is from Muscle Shoals, Alabama. He attended Colbert County High School in Leighton, Alabama.

He and the Baltimore Ravens signed quarterback Joe Flacco to a massive contract extension following the team's Super Bowl victory in 2013.

Ozzie Newsome Is A Member Of