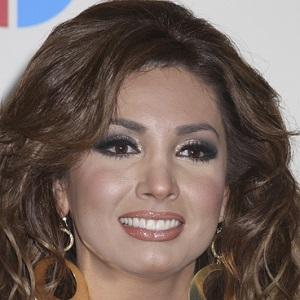 Famous for her telenovela roles as Alicia Ferreira and Yadira in, respectively, La Fea Mas Bella and Mariana de la Noche, this Mexican actress also had a career as a singer. Her debut recording, Instantes, became a certified Gold album in Mexico.

She made her professional music debut when she was only fifteen years old. Several years later, she played the supporting role of Iris in a telenovela titled María Mercedes.

Her role as Mireya Mendoza in the 1990s soap opera Cañaveral de Pasiones launched her to fame and earned her a 1997 TVyNovela Award.

Her father, Jesús Navidad, inspired her childhood interest in singing. She became engaged to the Turkish pop singer Emir Sevinc but the two eventually broke up. In 2010, she began dating Leonardo Bours.

She co-starred with Jaime Camil in the soap opera Por Ella Soy Eva.

Patricia Navidad Is A Member Of