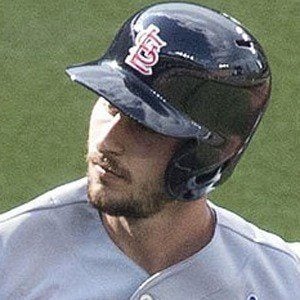 Infielder who was a fourth round pick of the St. Louis Cardinals in the 2015 MLB Draft. He made his MLB debut in May 2017 and was named July's NL Rookie of the Month that same season.

He played college baseball at the Illinois State University.

He was originally a 38th round pick of the Pittsburgh Pirates after his sophomore year of college, but did not sign.

He was born to Keith and Andrea DeJong and has a brother and sister.

He was the first Cardinals' player since Kolten Wong to win a Rookie of the Month award.

Paul DeJong Is A Member Of