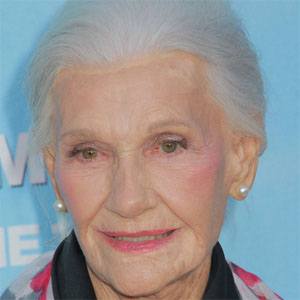 Actress of Republic Pictures' B-movie western films of the 1940s, including Oregon Trail, The Way West, Gun Street, and Utah. She also appeared as Mrs. Johnson in the 1961 version of Lassie.

She fell into acting after deciding on a lark to take an acting class in Los Angeles, and a neighbor in Atlanta, where she lived, helped her get cast in the 1937 film Wells Fargo.

She often played the tough Western heroine in a time when many actresses were stuck playing the damsel in distress.

Her parents divorced when she was young, and her mother remarried, giving Peggy O'Rourke her last name of Stewart. She was married to Don Barry from 1940 until 1944 and Buck Young from 1953 until 2000.

She played the grandmother of Jenna Fischer's character, Pam Beesley, in two episodes of The Office.

Peggy Stewart Is A Member Of