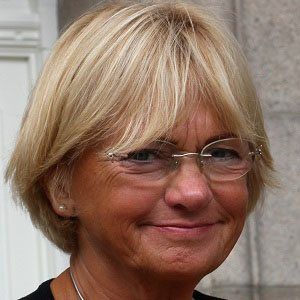 Famous for founding and leading the conservative Danish People's Party, this politician began serving in the Danish Parliament in the mid-1980s. She is infamous for her anti-Muslim and anti-immigration political stances.

Before beginning her political career, she worked in the in-home care and insurance industries. She first ran for office as a member of the Progress Party.

In 2012, she transferred leadership of the Danish People's Party to Kristian Thulesen Dahl.

The Copenhagen-born daughter of a businessman and a housewife, she later married insurance salesman and local politician Henrik Thorup; the couple raised children named Troels and Nan.

She and Prime Minister and Social Democratic Party leader Helle Thorning Schmidt are both female politicians from Denmark.

Pia Kjaersgaard Is A Member Of