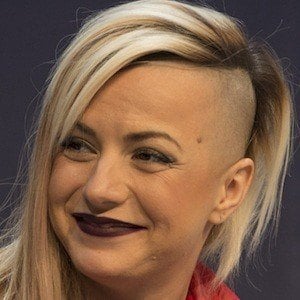 Two-time Eurovision Song Contest representative of Bulgaria who finished in fourth place in her 2016 attempt to win the title with her song "If Love Was a Crime." She released an album called 1, 2, 3 in 2013.

She was part of a children's vocal ensemble called Bob-Bon in 1995 to begin her career, and would host a Bob-Bon children's TV program.

In 2015, she hosted the Junior Eurovision Song Contest 2015. She was a judge on the 1st season of The X Factor Bulgaria and participated in the 4th season of Your Face Sounds Familiar Bulgaria.

She was born Poli Plamenova Genova in Sofia, Bulgaria. In December 2018, she revealed she was expecting her first child.

She fell to eventual champion Jamala in the 2016 Eurovision Song Contest.

Poli Genova Is A Member Of