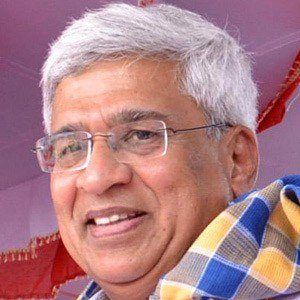 This prominent Indian politician took office in 2005 as General Secretary of the Communist (Marxist) Party of India. He had previously helped to establish the Students Federation of India (SFI), a youth branch of the Communist Party.

A member of the Malayali ethnic group, he grew up in Burma as the son of a railway worker. In his late childhood, he relocated with his family to India and eventually earned an honors degree in economics from the Madras Christian College. He later received a graduate degree from the University of Edinburgh (Scotland).

A radical and activist during his youth, he participated in underground circles and was twice arrested.

He married fellow communist politician in the mid-1970s; the couple remained childless by choice.

During his time (in the 1970s) as President of the Students Federation of India, he made the acquaintance of activist and future Indian Finance Minister Palaniappan Chidambaram.

Prakash Karat Is A Member Of