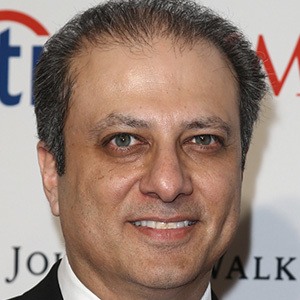 Attorney who rose to fame as the US Attorney for the Southern District of New York between 2009-2017. His crusades against Wall Street financial and bipartisan political corruption earned him a spot on the 2012 Time Magazine 100 Most Influential People in the World list.

He was named by India Abroad as the 2011 Person of the Year. In April 2017, He joined New York University's School of Law as a distinguished scholar in residence following his dismissal as a US Attorney by then new-president Donald Trump.

He shares three children with his wife Dalya. His younger brother Vinit is a successful entrepreneur.

His investigations of SAC Capital helped to inspire the popular Showtime TV series Billions and its fictional Southern District of New York US Attorney, who has been played by Paul Giamatti.

Preet Bharara Is A Member Of