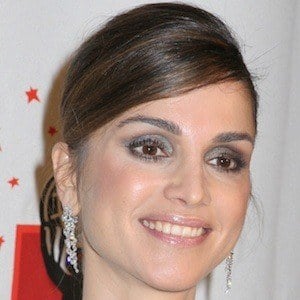 Queen consort of Jordan who is an avid speaker on global issues with a focus of education. She notably helped establish the Jordan River Foundation, which was meant to help children in welfare families.

She worked for Citibank and Apple Inc after graduating from American University.

She was featured in the video, "End Poverty - Be the Generation," by musical artist will.i.am.

She has four children with her husband, Abdullah II of Jordan, whom she married in 1993.

She worked with Nelson Mandela on global campaigns to discuss cross cultural differences.

Queen Rania of Jordan Is A Member Of