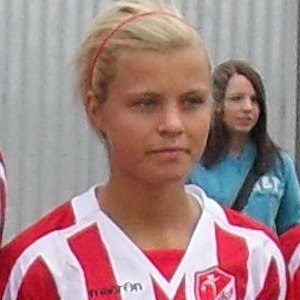 English international soccer player who was taken with the sixth overall pick of the NWSL Draft in 2016 by the Houston Dash. She played college soccer at St. John's University.

She grew up playing with Leeds United and won the League Cup Championship in 2009. She also spent time with the Lincoln Ladies before attending St. John's.

She played for England at the U-17 Women's World Cup and earned her first senior cap in 2016. She finished her college career as St. John's all-time leader in goals.

She was born to Martyn and Louise Daly and has an older brother named Andy. She's been dating her Houston Dash teammate Kristie Mewis.

She and Janine Beckie were both taken by the Houston Dash in the 2016 draft.

Rachel Daly Is A Member Of